Life Cycle of The Chagas Disease 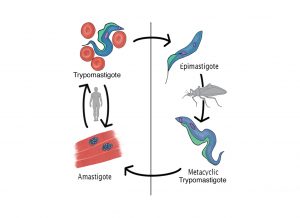 The life cycle of T. cruzi is relatively complex, as there are different forms of the parasite in both the insect vector (Reduviid bugs) and mammals (including humans but also many other species); all appear to be well adapted to their respective environments, maximizing transmission potential and/or host immune evasion and, hence, long-term parasite survival.

T. cruzi cycles between two biologically and morphologically distinct stages in mammals. The trypomastigotes circulate in the blood, where they do not divide, but can enter various types of cells in the host. Once inside a host cell, T. cruzi trypomastigotes move to the cytoplasm and transform into a more rounded form without a flagellum – known as amastigotes. Amastigotes are the dividing form of T. cruzi in mammals.

T. cruzi has a rather unique way of infecting mammals. Rather than being transmitted by the bite of its insect vector, metacyclic trypomastigotes are extruded as the infected insect feed – leaving them deposited on the skin of victim. The parasites themselves have no way of invading through the unbroken skin and thus must be mechanically introduced – e.g. through scratching the bite site or rubbing the feces into the mouth or eyes, where the parasites can find hospitable cells to invade.

It has been proposed that Charles Darwin had Chagas disease – because of his many ailments and his documentation that he allowed a reduviid bug take a blood meal from him. However it seems very unlikely that this single encounter (even if it was with an insect infected by T. cruzi) resulted in infection of Darwin.

This is not an easy infection (for humans) to get – simply traveling in an endemic area or even being bitten by an infected reduviid bug is not likely to result in infection.  However eating raw food contaminated by the feces of infected insects is increasingly recognized as a major risk factor for infection.

It has also recently been reported that bed bugs can carry T. cruzi and thus are potentially infectious to humans.  However transfer of infection from bed bugs to humans (or to other animals, except possibly by the ingestion of bed bugs) has not been reported.

Chagas disease: Hybrid strains make insidious parasite more dangerous - Science Daily
10 May 2022
The disease that lurks for decades - BBC
26 April 2022
World Chagas Disease Day: finding and reporting every case - World Health Organization
14 April 2022
Media Advisory: Vaccine scientist Peter Hotez will give virtual talk sponsored by UB - University at Buffalo
20 May 2022
Safety, Outcomes of Nifurtimox in Patients With American Trypanosomiasis (Chagas Disease) - Infectious Disease Advisor
31 March 2022
Identification and development of a series of disubstituted piperazines for the treatment of Chagas disease
20 May 2022
Major depression favors the expansion of Th17-like cells and decrease the proportion of CD39<sup>+</sup>Treg cell subsets in response to myelin antigen in multiple sclerosis patients
18 May 2022
A note on the the discovery of Chagas' disease
18 May 2022
Chagas disease and its historicity
18 May 2022
Chagas disease challenge - New techniques for diagnosis and treatment address to control in endemic areas
18 May 2022