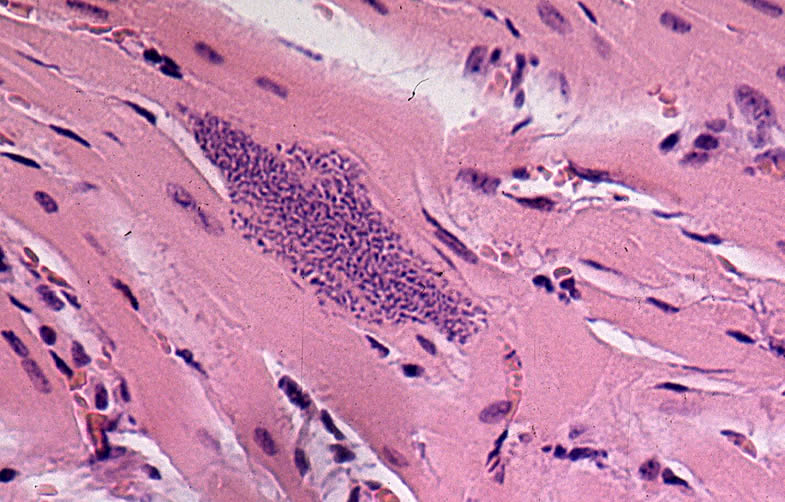 Above. Intracellular amastigotes of T. cruzi (many small “dots” in the cell in the center) inside a skeletal muscle cell.  Below. A trypomastigote of T. cruzi among red blood cells  in a blood sample. 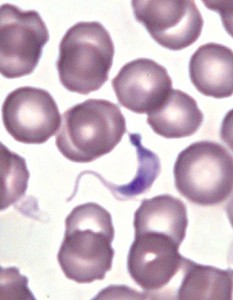 Trypanosoma cruzi is a blood-borne parasite of humans and many other mammals and is the cause of Chagas disease, a chronic illness that can eventually result in debilitating heart and/or intestinal disease.  Although the full impact of Chagas disease is not known (between 10 and 20 million people are likely to be infected) it is clear that Chagas disease affects more people than any other infectious disease in Latin America and that it ranks as the largest cause of heart disease-related deaths in the region.  However Chagas disease is also a greatly neglected disease with respect to its detection and diagnosis, prevention of transmission, and the development of treatments.

T. cruzi not only infects humans but is also found in wildlife and domestic animals throughout much of rural and peri-urban areas of Latin America. In the U.S., T. cruzi is commonly reported in dogs and a range of wild animals (e.g. raccoons,  opossums, etc), with human cases being less common (although it is estimate that there are as many as 300,000 T. cruzi-individuals in the U.S.). Transmission of T. cruzi occurs mainly through blood-feeding triatomine bugs, but it also can occur congenitally (i.e. mother to child), through blood transfusion or organ transplantation, and  via the ingestion of  food or liquids contaminated by infected insects.  In fact an oral route of infection in humans and other animals is probably more common than is generally appreciated and has been associated with a number of significant outbreaks accompanied by infection-associated deaths.  In most cases, infection is probably initiated with relatively small numbers (e.g. 100’s to 1000’s) of parasites which spread relatively rapidly (within weeks) from the initial infection sites to tissues and organs throughout the body.